As a wholly-owned subsidiary of the National Center for Defense Manufacturing and Machining (NCDMM), AMIIC strives to boost North Alabama’s and the nation’s industry through the acceleration of adoption of advanced manufacturing technologies and the further development of a highly-skilled workforce.

Among its many offerings is a Training Hub offering a wide variety of hands-on and virtual training opportunities for its government, industry, technology, and academic partners.

In addition to courses in subjects such as Army Policy for Advanced Manufacturing, Introduction to Model-Based Systems Engineering, Basics of Optical Measurement, and Introduction to Additive Manufacturing Workflow, AMIIC offers over 75 online courses and can tailor any curriculum by leveraging academic partners and a national network of technologists. 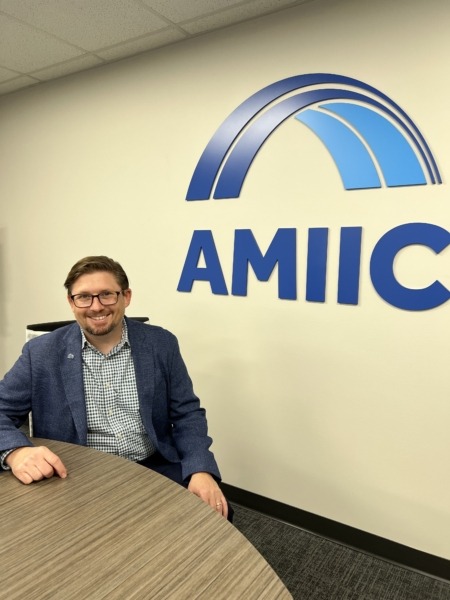 According to AMIIC Executive Director John Schmitt, the nonprofit has worked with around a dozen companies so far since its opening in February and has contracts in the works with a number of federal organizations.

The Training Hub’s newest course offering is the Introduction to Digital Engineering class, taught by industry experts from the University of Texas at El Paso (UTEP), which runs the Digital Engineering Design Center at AMIIC. During its inaugural session, SAIC Innovation Factory employees made meaningful connections with AMIIC experts as they learned how to use advanced technologies to streamline the engineering process.

“What we’re excited about with SAIC doing this is they want to be a leader in digital engineering…we know it’s going to take some of those early adopters to create the competitive pressure that gets everybody upskilled. That’s our goal,” Schmitt said.

Schmitt observed that because this is a new technological revolution, there’s no workforce to execute it–one goal, therefore, is to also provide middle management with the tools and understanding needed to encourage employees to adopt the necessary skill sets to move forward in the digital engineering enterprise.

“Our whole goal is to lower the barrier to entry and educate as many people as we possibly can in digital engineering practices,” Schmitt said. “It’s a whole philosophical shift. And the reality is, those who do not fully embrace it will simply be left behind.”

When asked what drew UTEP to this program, Schmitt explained that in 2012 the National Defense Authorization Act established eight advanced manufacturing institutes, the first of which was in additive manufacturing. “That one was called America Makes,” he said.

UTEP’s W.M. Keck Center for 3D Innovation is a satellite of America Makes, “so [it has a] very highly technical, incredible amount of academic and functional expertise in additive manufacturing, which augments our regional partnerships,” Schmitt said. “They also have an aerospace center, which is where this comes into play.”

Schmitt cited a 2019 Deloitte study that outlined a 500,000-person skilled workforce gap by 2025. “We need to access traditionally underrepresented communities and provide them [with] exposure, opportunity, education, and employment.”

“Rather than reinvent the wheel, we reached out to the University of Texas-El Paso, who is the largest minority-serving institution in the country,” Schmitt said, explaining that the aerospace center has a program that takes students who may come from under-resourced schools and underrepresented communities and offers them opportunities to work on “NASA projects or industry projects on missiles, hypersonics, aerospace-related projects.”

“These kids who otherwise may not have that opportunity end up Masters, PhDs, but more importantly, end up in industry very quickly…it just changes the trajectory of their entire family. So we’re doing the same thing here,” he continued.

According to Schmitt, there are now three Digital Engineering centers: one at UTEP, one in Huntsville, and one in Youngstown, OH with an additional one being established at Johnson Space Flight Center in Houston, TX. “The projects that these students are working on are everything from lunar landers to hypersonic waveriders to whatever–very high end exposure but also delivering product and research.”

“Because Dr. Choudhuri and his [UTEP] faculty have become thought leaders in digital engineering nationally, we wanted to expand that relationship and that partnership to make sure that we meet DoD’s requirements for one of their digital engineering priorities–culture in workforce,” Schmitt said, adding that a lot of the challenges aren’t technological so much as cultural.

“It’s about upskilling a workforce that has never done it like this. Interconnectedness between everything from business practices to logistics all the way through the design cycle. That’s where digital engineering comes into play. Because of the commodities built here on Redstone–hypersonics, long-range fires, directed energy, counter UAS, Future Vertical Lift–we can’t afford to be behind anymore with this workforce.”

According to Schmitt, the growth of digital engineering will help the U.S. compete more effectively against China, which he said is producing systems five times as fast as the U.S. and spending about 5% dollar-for-dollar on providing capability to the field. “They’re whooping us in manufacturing in cost and scale,” he said.

“The way that we get back into the competitive field that we need to be in is to adopt digital engineering, which reduces that developmental cycle time” Schmitt continued. “Instead of building something physically, you build it digitally, test it, integrate it all digitally before you ever build it.”

While the Training Hub courses focus primarily on early and mid-career level professionals, the Digital Engineering Design Center focuses on college students, who Schmitt said came from schools such as Tuskegee, Alabama A&M, and UTEP. Schmitt expects around 20 by the end of the semester.

Students at the Digital Engineering Design Center are paid a stipend so they can focus on their studies. “To do digital engineering, it’s so interdisciplinary–you have to have these project-based exercises to really become successful practitioners, and that’s what we’re trying to give these students,” Schmitt said.

AMIIC also has plans to work with students from the Alabama School of Cyber Technology and Engineering. “It is absolutely our intent,” Schmitt said.

“ASCTE is not just about cyber–people think cybersecurity, but it’s about engineering lifecycle with cyber in mind. So it’s really important for us to help build some of this curriculum that will bridge the gap from high school skills into this interdisciplinary digital engineering environment. It’s a lot more complex than a lot of engineering’s been in the past.”